Nearly 300 people gathered in central London this week to hear who had won the top spots in this year’s NatWest SE100 Awards.

It’s much harder to be a top social enterprise than a top enterprise… It requires a lot of passion, perseverance, and resilience. 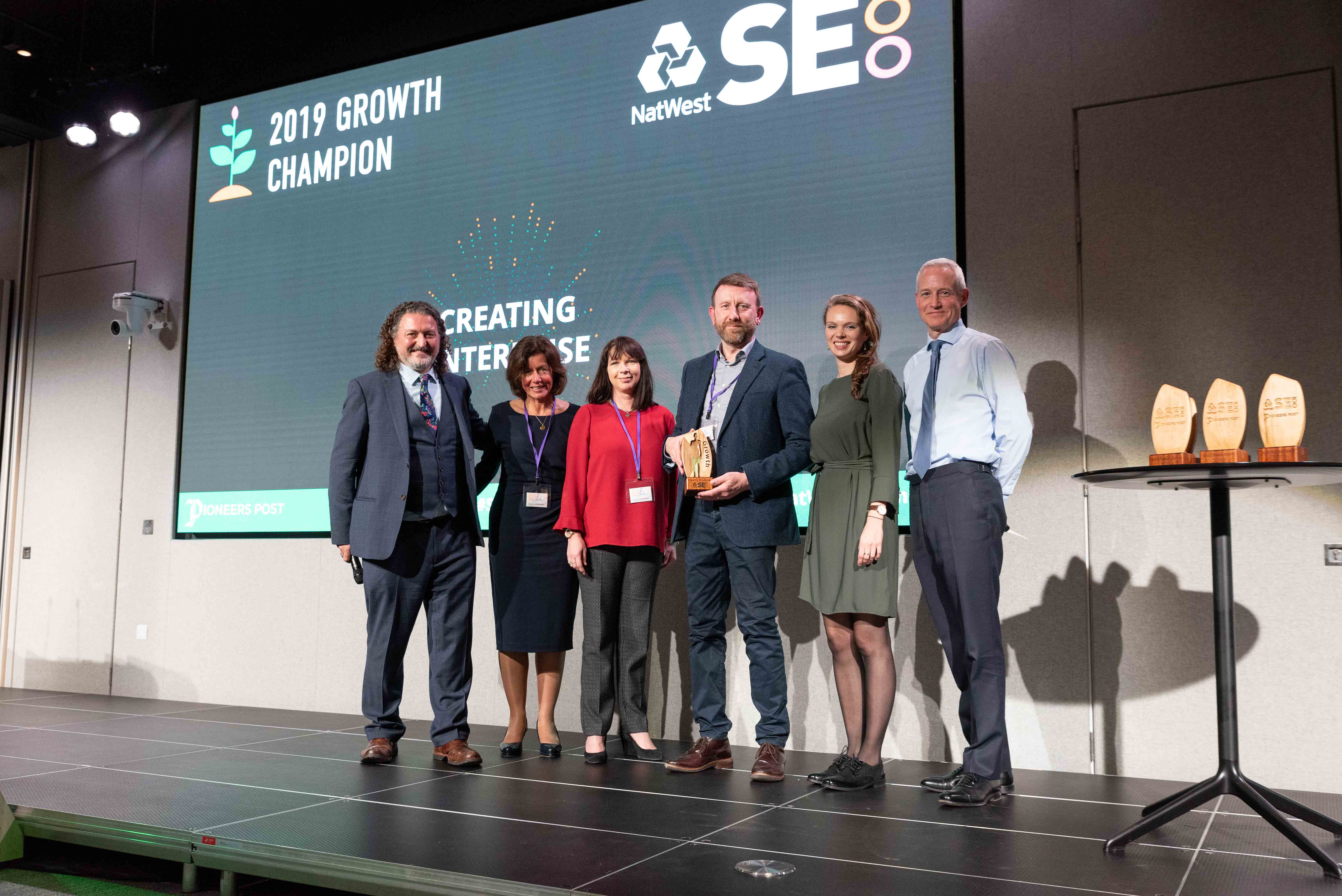 Creating Enterprise, a building and maintenance social enterprise based in North Wales, was named the 2019 Growth Champion.

Part of the housing association Cartrefi Conwy, Creating Enterprise has grown rapidly since it was established as a community interest company in 2015. Its most recent accounts show an increase in sales of more than 300%, from £1.3m to £5.4m, with profits increasing by the same rate. Its ambition is to hit more than £35m turnover within a further five years.

As well as maintaining properties, Creating Enterprise helps local people to find employment, training and volunteering opportunities – and 100% of their commercial profits are reinvested into employment initiatives via their Employment Academy. The Employment Academy trained more than 1,000 people between April 2017 and February 2018. 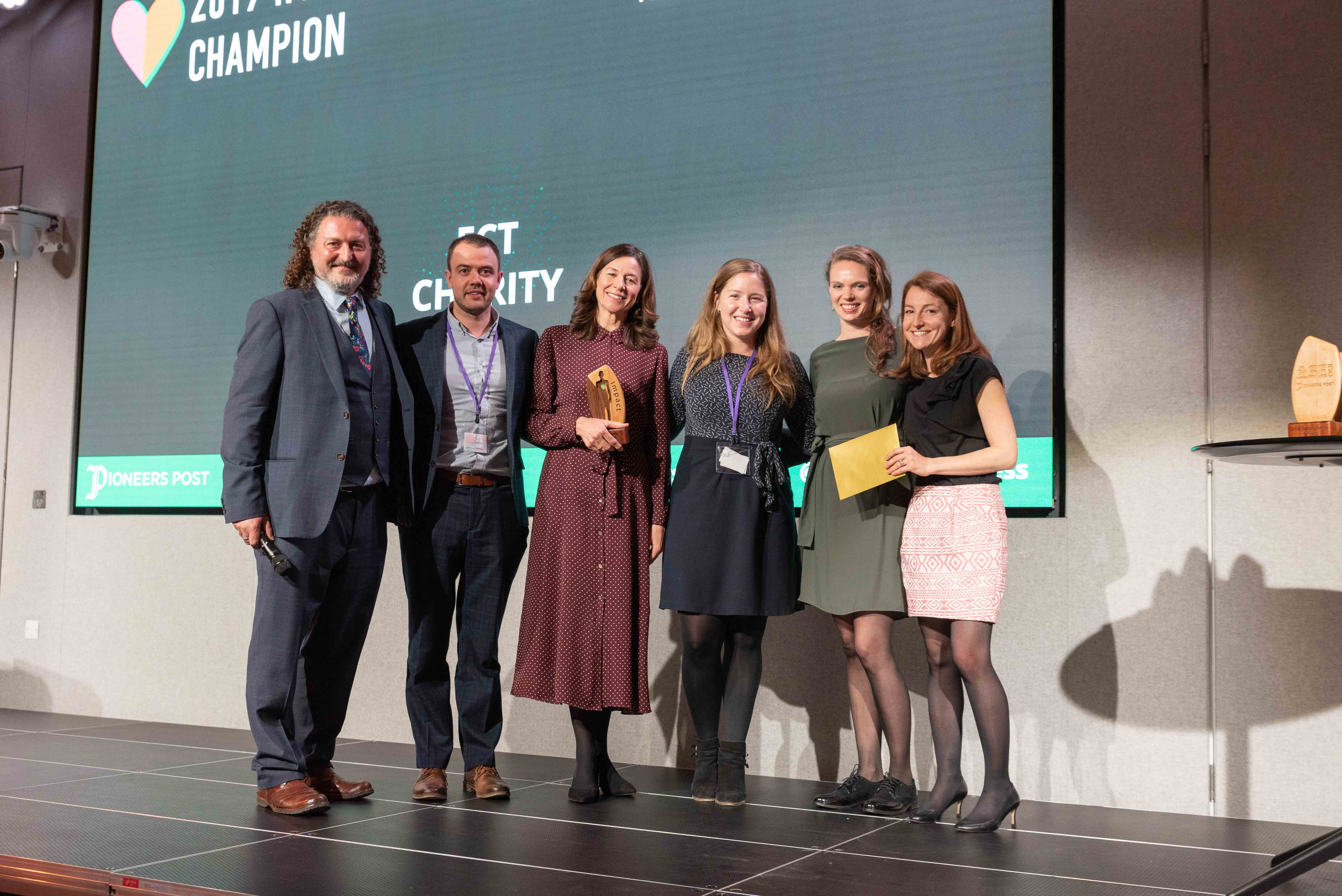 ECT Charity – a community transport operator working in London, Cheshire and Dorset – won the Impact Champion award. The social enterprise delivers affordable and accessible transport for people who are unable to access mainstream services – from taking elderly residents to GP appointments or shopping trips, to school minibuses and serving rural bus routes in isolated parts of the countryside. ECT was praised for developing a framework for measuring its social value, which it has not only put into practice itself but offered for use across the community transport sector. 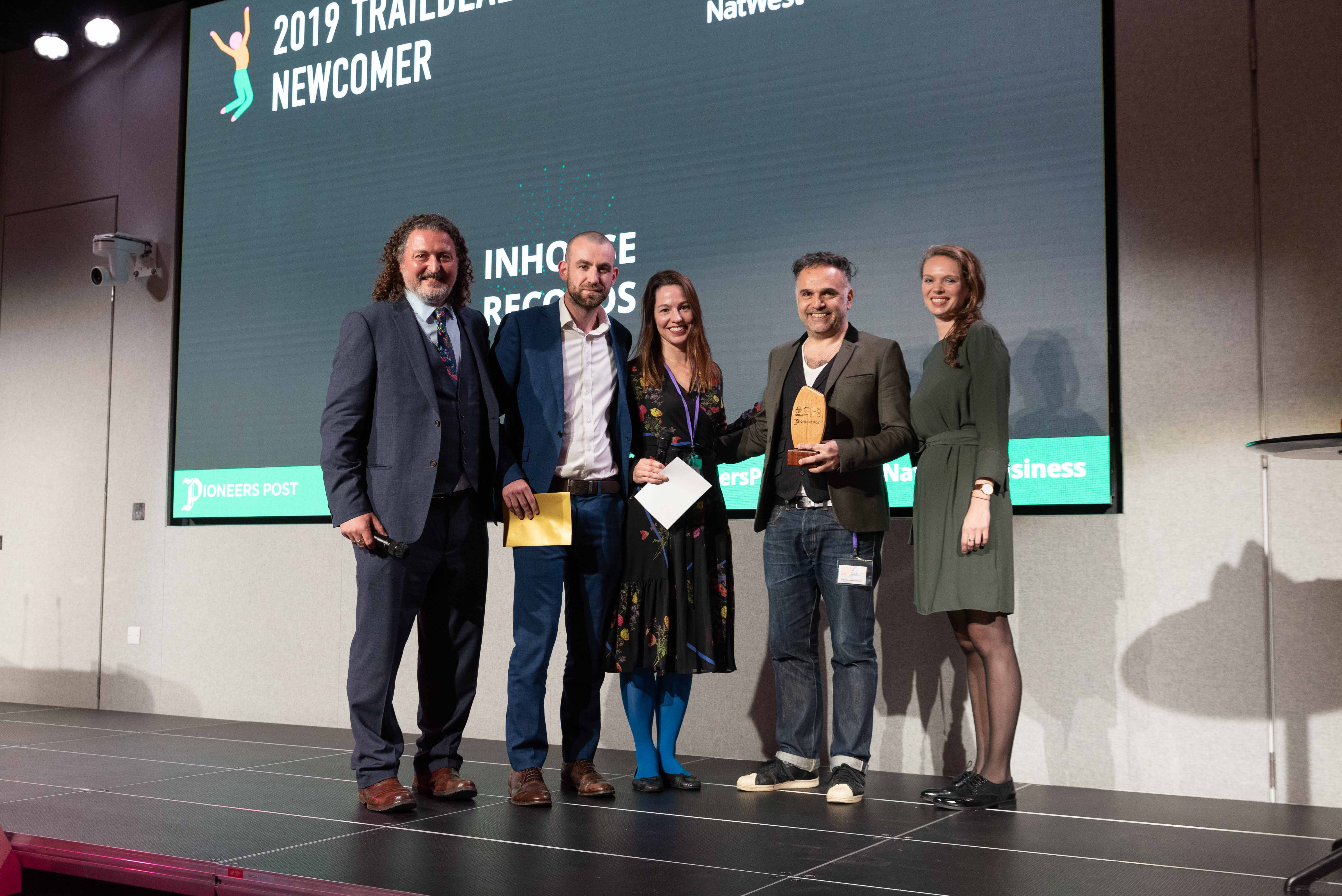 InHouse Records, which focuses on the rehabilitation of offenders both inside and outside of prison through the medium of music, is the 2019 Trailblazing Newcomer.

Since launching in 2017, the record label has expanded to six prisons where the songwriting, management, recording, producing and performing are all undertaken by the prisoners themselves. InHouse is supported by EY, Royal College of Art and Universal Records, each of whom acts as an authenticator of the entity’s three main business areas – Business, Design and Music respectively. It employs 12 staff and recently signed a deal with BBC, which will produce a six-part documentary on their work. 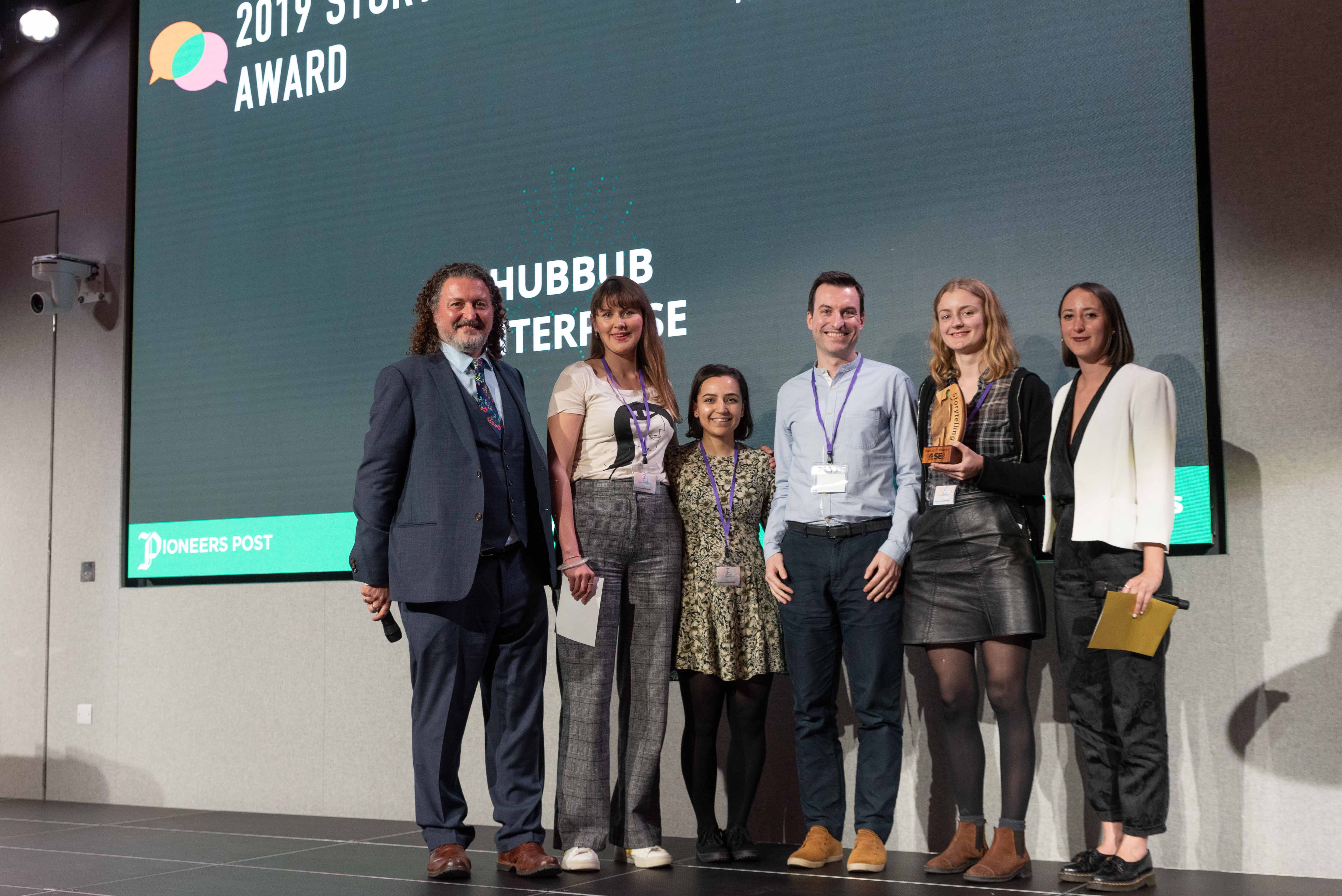 Hubbub is a charity that creates playful campaigns to inspire people to make healthier, greener lifestyle choices. Its social enterprise arm, Hubbub Enterprise, is the 2019 Storyteller Award winner. The enterprise aims to scale the impact and earning power of the charity’s campaigns – which it began by launching the world’s first ‘voting ashtray’, the ballot bin. It has now sold more than 700 bins in over 20 countries, helping reduce cigarette butt litter by up to 46%, and reaching over 12 million people via its online campaigns.

The quality of the field in all categories was the best I can recall in the nine years of involvement.

More recently Hubbub made headlines with a 99% recycled plastic fishing boat made using plastic fished out of the river Thames. The social enterprise created a new income stream by offering ‘Plastic Fishing Trips’ for corporates – generating over £50,000 in its first year, and almost £20,000 profit, which it shared with its primary school partner in Docklands. 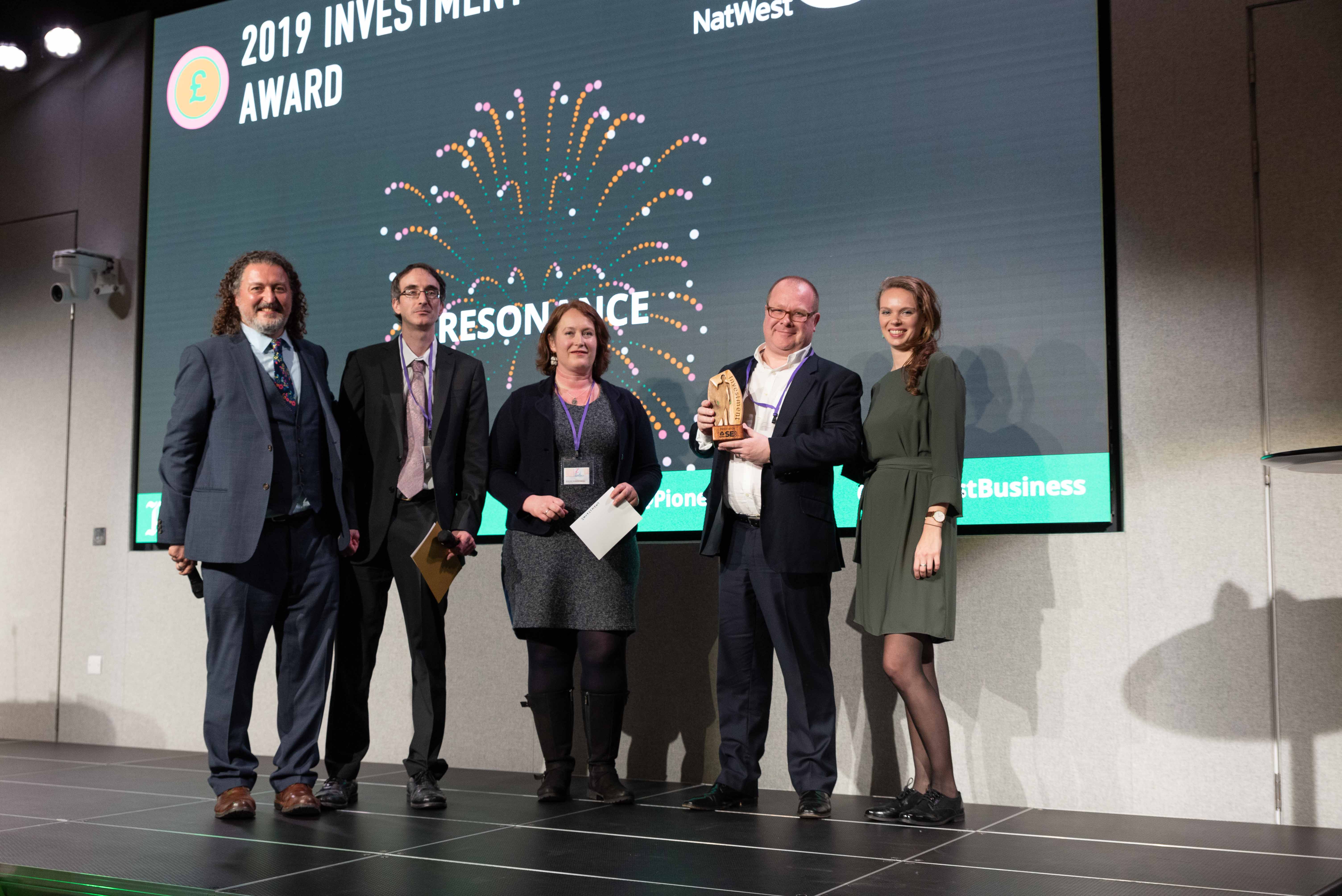 Resonance, based in Cornwall but operating across the UK, wins the Investment award for ‘Good Deal of the Decade’ for its groundbreaking partnership with St Mungo’s and others to create the Homelessness Property Funds. Resonance’s three property funds – The Real Lettings Property Funds 1 & 2 in London, and the National Homelessness Fund –  have now grown to more than £155m and provided 600+ homes nationwide, housing over 1,500 people who are homeless or vulnerable to homelessness.

Judges said the Resonance deal was an innovative financial response to a massive and growing social problem – and a great example of social investment leveraging other funding from a wide range of partners, including charities, foundations and local authorities.

To learn of these initiatives being led by entrepreneurial leaders in social enterprise is inspiring and brings a much-needed optimism for the future. 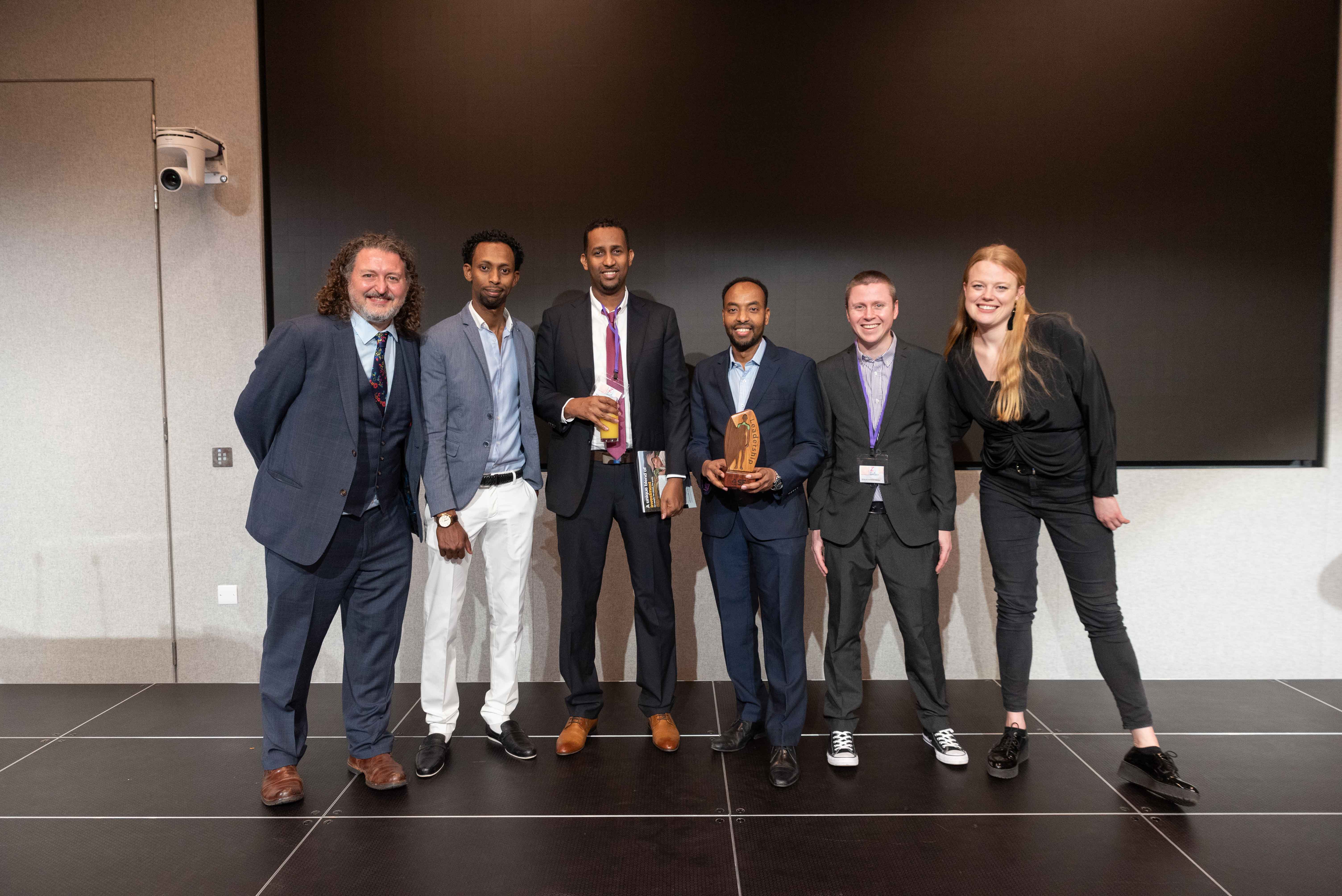 Fuad Mahamed, who came to the UK as a refugee from Somalia with no English, went on to obtain a first class degree in Engineering, and then set up social enterprise ACH to support the resettlement of refugees like himself, wins the 2019 Leadership Award. Fuad has built the organisation into one of the leading providers of support for excluded and marginalised people. It now spans three cities, employs 65 people and works with 2,500 individuals a year. 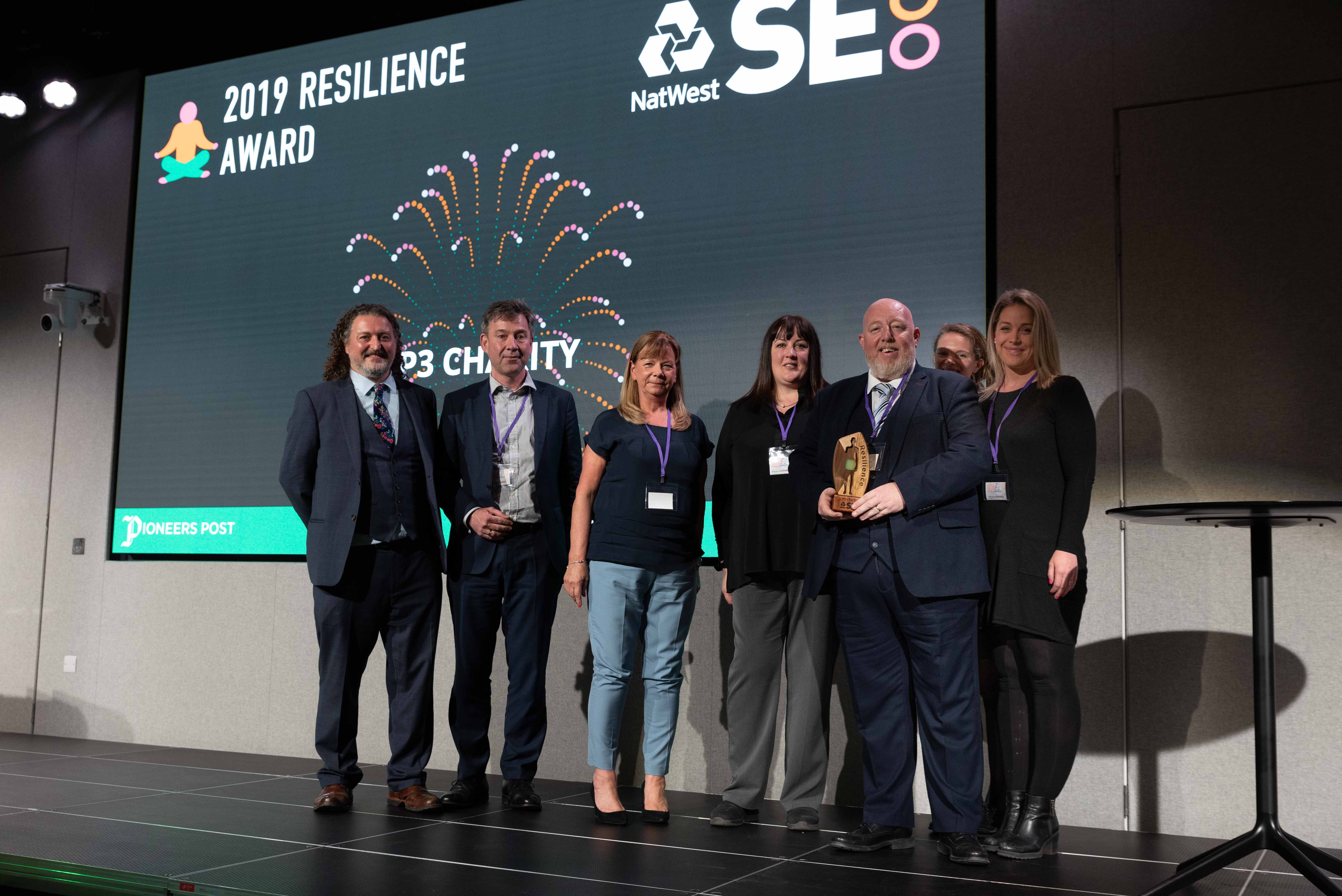 P3 Charity, based in Derbyshire, is the winner of the 2019 Resilience Award. Standing for ‘People, Potential, Possibilities’, P3 aims to help people out of social exclusion by delivering a variety of services, from hostels and assisted accommodation to support/advice centres, street outreach work, after school and play services, and work with offenders.

P3 is a well-established social enterprise, having first started operating in 1972. Due to the proximity of its Rugby Portobello Trust base to Grenfell Tower, the charity became an integral part of the response to that crisis – notably through the intensive involvement of CEO Mark Simms. During this challenging time, the charity also undertook a merger, established two innovative social impact bonds, established its own registered housing provision and integrated a number of newly won contracts.

The judges were impressed with the agility of the organisation enabling it to deal with a fundamental surge in activities and continue its planned growth and evolution, with other senior management team members taking on responsibilities temporarily displaced from the CEO.

The strongest field yet

Speaking at the event, Simon Jacobs, chief administration officer at RBS/NatWest and chair of NatWest Social & Community Capital, the bank’s social investment charity, said: “It’s much harder to be a top social enterprise than a top enterprise. Not only do you need the great idea,  you need to be able to sell it and communicate it. You need to be really clear about your impact… Very often you’re working where there’s been some market dislocation or failure – that’s a really risky part of society to work in as a business. It requires a lot of passion, perseverance, and resilience.” He went on to praise the “powerful” network among the social enterprise sector, saying people were “really invested in the success” of one another.

Eddie Finch, Partner at Buzzacott Accountants, said: “As far as this year’s SE100 is concerned I’d say that the quality of the field in all categories, but particularly the leaders’ award and the resilience category which I was closest to, was the best I can recall in the nine years of involvement. There was fantastic mix of imaginative and inspiring start-ups and mature business organisations that continue to deliver on economic and social inclusion, environmental sustainability and a host of other social value aims.”

The team at Buzzacott accountants – who have supported the SE100 since it launched nine years ago – carried out due diligence during the shortlisting process for the Growth, Trailblazing Newcomer and Resilience categories.

Neil McLean, CEO of the Social Enterprise Academy and one of the external judges, said: “In an era marked by the continual withdrawal of public resources and the need for greater international collaboration to tackle global issues, to learn of these initiatives being led by entrepreneurial leaders in social enterprise is inspiring and brings a much-needed optimism for the future. It has been an absolute privilege and a pleasure to be a part of the panel judging the 2019 SE100 awards. The entries are testament to the principle that it is not just possible for both social and business causes to be served and thrive but it’s an absolute imperative that it does so.”

The NatWest SE100 is brought to you by Pioneers Post in partnership with NatWest. The SE100 Index represents the ‘top 100’ social enterprises from all applicants based on a variety of criteria, with points awarded based on the seven awards (growth, impact, leadership, etc).

For more insights from top-performing social enterprises in the UK and beyond, sign up to our weekly newsletter or browse our SE100 collection.

Thanks for reading our stories. As an entrepreneur yourself, you’ll know that producing quality work doesn’t come free. We rely on our subscribers to sustain our journalism – so if you think it’s worth having an independent, specialist media platform that covers social enterprise stories, please consider subscribing. You’ll also be buying social: Pioneers Post is a social enterprise itself, reinvesting all our profits into helping you do good business, better.